The Diversity Spotlight celebrates the accomplishments of our members, health care leaders and other diversity champions.

In the Spotlight: Steven M. Barney 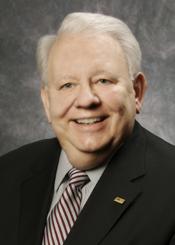 Steven M. Barney has been a pioneer in the movement for greater diversity in health care and a champion for related issues throughout the field.  Since 1988, he has served as the senior vice president of human resources at St. Louis-based SSM Health Care, an Institute member with more than 24,000 employees that is consistently recognized one of the nation's most diverse and culturally competent health care organizations.

During his tenure at SSM, Mr. Barney launched a comprehensive ethnic and gender diversity program that led to the increase of the female: male executive ratio from 37: 60 to 50: 50.  Additionally, he developed and implemented the Executive Development and Succession Planning program, which includes a three-year executive training program for diverse junior executives.  He also created SSM University, an educational tool used to develop leadership at all organizational levels.

Mr. Barney began his career in journalism, which quickly led to work in hospital public relations.

"All of a sudden, I went from editing the editorial page of a daily newspaper to being a part of a hospital administrative team," he explains, and, after returning to his alma mater, the University of Wisconsin at Madison, for a Master's degree in health care administration, he made a permanent career switch.

Although Mr. Barney did not enter health care until later in his career, it was during his undergraduate years that he began to observe the need for diversity and cultural competence.

"It was in the early 1960s when I was a student [that I] became keenly aware of racial injustices in our midst," he says.  "From my college days on, the tremendous untapped potential of diverse Americans-not to mention injustices of racism-has been a compelling theme in my family and my work.  I see progress…but there's a lot that isn't happening that needs to happen for diversity to be embraced in a meaningful way throughout our society."

Steven M. Barney has turned that need for progress into a personal calling.  His dedication to diversity at SSM Health Care over the past 20 years has changed lives as well as the face of the field, and has rendered him deserving of the Institute's Diversity Spotlight.